Everest 2013 Expedition from Tibet Side

When you hear that someone has reached the top of Mount Everest, you may assume that he or she climbed the Southern Route used by Edmund Hillary and Tenzing Norgay in 1953. After all, this route – which begins with the Khumbu Icefall in Nepal and then proceeds through the Western Cwm, up the Lhotse Face, and to the summit via the South Col and the Hillary Step – is used by more climbers than any other path. There are, however, 14 other routes, and most of them are more difficult than the most popular way.

This is the case of the North Ridge Route, which begins in Tibet. This route has become almost as popular as the South Col route, but is somewhat more challenging. As Eric Simonson of International Mountain Guides explains, not only is the North Ridge technically difficult because of its terrain, but it also requires some particularly careful, even counterintuitive, planning. First of all on the North Ridge climbers spend a lot of time on steeply sloping shale and ice, and “it’s tough to get your crampons into that stuff!” To make matters more difficult, the geography of the North Ridge requires the final camp to be at a much higher elevation than the final camp on the South Col. The result, says Simonson, is that

Another challenge posed by this route is the long traverse along the North Ridge on summit day. The guide explains that “this means you are covering a lot of lateral distance, which really comes into play on the descent“. Here’s where careful planning becomes so important. Because so much of a climber’s time on the North Ridge is spent negotiating sloping rock and ice at the highest altitudes, he must make sure to have plenty of oxygen and energy for use on the difficult descent at least as much as needed to ascend to the summit. Basically, says Simonson, “you have to have enough gas left in your tank (both literally and figuratively) to make the descent. You can’t afford to burn more than 50 percent of your reserves going up, because you’ll definitely need the other half to get down”. The most common problem he’s seen with climbers on the north side is that they underestimate how long it will take them to make the technically difficult, traversing descent to camp from the summit, and they run out of oxygen before they reach the camp. Overall, he explains, “the prolonged time spent at higher altitudes and the time it takes to do that traverse in both directions catch a lot of people off guard on the North Ridge”. Sometimes, it seems, knowing that “it’s all downhill from here” isn’t much of a comfort”.

Once the immigration formalities have been completed, which sometimes can be lengthy, we start the drive towards base camp. We spend two nights each in the towns of Nyalam and Tingri for cautious acclimatization before arriving on the final day at Old Chinese Base Camp.

After more acclimatization days at advanced base camp and the progress of the fixed ropes being placed towards camp two, we climb to camp one where we spend the evening and then in the following days we climb towards camp two reaching an elevation of roughly 7,500-meters before returning to the North Col. We spend a second evening at the North Col before returning to advanced base camp.

The climbing begins by following the trail out of advanced base camp leading to the gear depot. Some teams leave their heavy mountaineering boots; crampons and axes at this area. We then walk over the flat section of the glacier to approach the foot of the north col. Fixed ropes will be in place and we climb slopes up to 45-degrees before reaching the halfway point up the col. The first aluminum ladder crossing a crevasse is short and the route continues culminating with a short steep slope just before the second longer ladder crossing a deep crevasse before arriving in camp. The climb from advanced base camp to camp one takes between 4-8 hours.

Camp one sits on the North Col between the Everest North Ridge and Changtse. The route continues along the North Ridge using the fixed rope and the terrain switches from the snow ridge to easy mixed terrain at 7,500m (24,600ft) where we continue to our camp two. This is one of the longest days on the mountain and takes between 5-10 hours.

Camp two is located on the North Ridge and the tents are erected on platforms constructed from loose rocks. This campsite is very exposed and receives strong winds. Most climbers, if not already, decide to use their supplementary oxygen from here onwards. The route continues up the ridge before traversing diagonally right across the North Face and then takes a more direct route into camp three. The climb from camp two to camp three takes between 3-6 hours.

Summit day will start early and the route heads on moderate terrain with one technical rock section to pass before arriving on the Northwest Ridge. The ridge is narrow and is followed passing the first step, the crux of the climb, the second step with its two ladders in place and the third step before climbing the summit pyramid and then traversing a rocky section to the snow capped summit. The climb from camp three to the summit takes between 7-11 hours with 3-5 hours for the descent to camp three. 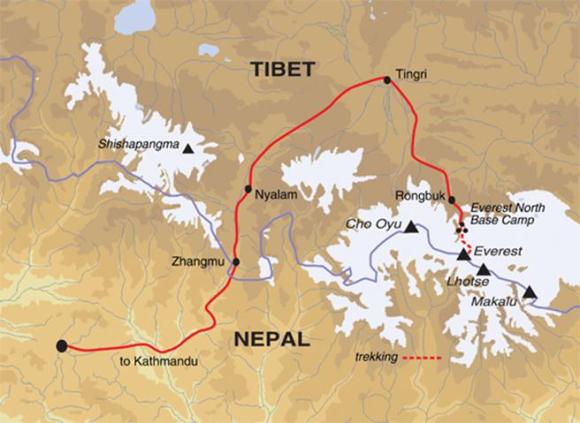 6 thoughts on “Everest 2013 Expedition from Tibet Side”