Today is “International Everest Day”, the date (May 29, 1953) Nepalese Sherpa Tenzing Norgay and New Zealander Edmund Hillary have become the first to reach the summit of Mount Everest on the Nepal-Tibet border. The two men hugged each other with relief and joy but only stayed on the summit for 15 minutes because they were low on oxygen. Mr Hillary took several photographs of the scenery and of Sherpa Tenzing waving flags representing Britain, Nepal, the United Nations and India. Sherpa Tenzing buried some sweets and biscuits in the snow as a Buddhist offering to the gods. They also looked for signs of George Mallory and Andrew “Sandy” Irvine who had disappeared in 1924 in a similar attempt to conquer Everest, but found nothing. 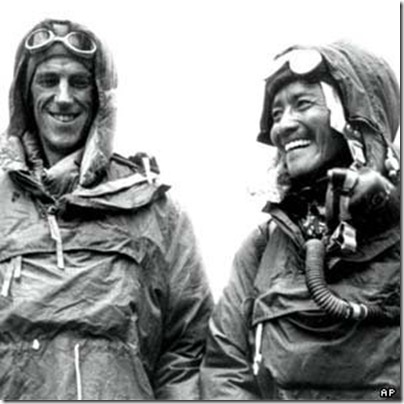